It has been a year of firsts for the commercial drone delivery concept.

In February, Alibaba’s online marketplace, Taobao, partnered up with YTO Express to run a real world test in Beijing, Guangzhou and Shanghai, allowing 450 people (on a first-come-first-served basis) to order ginger tea and receive it via UAV in less than an hour.

In June, Fastway Couriers teamed up with Flirtey to successfully carry out drone parcel deliveries in New Zealand by transporting automobile parts along a 1.9 km (1.2 mile) route in less than 5 minutes, compared to 20 minutes by traditional courier.

And now, Flirtey is at it again. The Australian commercial drone startup, in partnership with NASA and Virginia Tech, will be the first company to demonstrate the practicality of commercial drone deliveries in the US as part of a Federal Aviation Administration (FAA) approved test flight slated for July 17. Flirtey’s hexacopter UAVs and NASA’s fixed-winged aircraft will deliver pharmaceuticals to a free medical clinic in Wise, Virginia as part of the “Let’s Fly Wisely” event, which aims to demonstrate how drones can improve health care access and create economic opportunities.  A total of 24 packages will be delivered by Flirtey’s hexacopters, which are made from carbon fiber, aluminum and 3D printed components. Each lightweight, multi-rotor UAV has a range of 30 kilometers (20 miles). They feature built-in safety measures, such as low-battery alert and low GPS signal/full communication loss auto-return to a safe location. Cargo is lowered via a tether attached to the underside. As Flirtey Co-Founder and CEO Matt Sweeny stated, “This is a Kitty Hawk moment not just for Flirtey, but for the entire industry.”

If the flight proves successful, this will definitely be the turning point for commercial package delivery drone systems in the United States. With US regulations for commercial drones likely be finalized and in place within a year, a positive demonstration by Flirtey will certainly influence the FAA’s present stance which currently only allows for low-altitude flights of small drones within the visual line of sight of ground-based pilots.

A successful flight could also help allay people’s resistance to widespread deployment which, as naysayers like to point out, could lead to potentially crowded skies filled with thousands of delivery drones buzzing around with small packages and blocking out the sky. Dedicated “air lanes” and air traffic control systems such as the cellular tower based, “geo-fencing” system proposed by NASA and Verizon will be key to avoiding such a bleak dystopian future outlook.  Furthermore, as seen with the public’s reaction to the fake video of a drone colliding with a Southwest Airlines airplane and shearing off the tip of its winglet, further development and deployment of sense-and-avoid sonar technology such as the eBumper System for the DJI Phantom or the ultrasonic sensor/stereo camera visual positioning guidance system from DJI will need to be a requirement for all drones.

All in all, a lot is riding on this historic July 17 drone flight. How rapidly drones are embraced for package delivery purposes, and whether the US is ready for such systems, might just depend on the outcome of the Flirtey flight.  However, given Flirtey’s excellent track record, the future of the cargo drone delivery concept is certainly looking bright.

What do you think about the future of package delivery drones? Comment below!

#Gym workout pods, the new normal?
This is the innovative solution from a California #gym allowing customers to work out alone (or in a group) without a mask while adhering to #SocialDistancing rules in these #covid19 times.
https://unmndcrgo.co/2YF8xwB 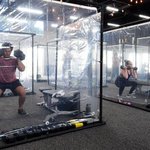 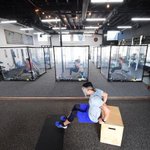