In February 2015, Alibaba’s online marketplace, Taobao, partnered up with YTO Express to run a real world test in Beijing, Guangzhou and Shanghai, allowing 450 people (on a first-come-first-served basis) to order ginger tea and receive it via UAV in less than an hour. For only 49 renimbi (US$ 7.84), those lucky enough to be able to participate in the pilot project were able to have a “unique and innovative shopping experience”.

Destinations and routes were pre-set by staff upon receipt of order thus allowing the five quadcopters forming the trial delivery fleet to automatically deliver their payload. However, the tea deliveries were not performed directly to the customers’ doors, rather the parcel drones landed in pre-designated landing areas near residential areas similarly to S.F. Express’ concept given that delivery needed to be confirmed by signature.

Unfortunately, there are no further plans to expand this concept. Link to the promotional Alibaba video can be found here or here.

Not specified however it most likely was the YTO X650.

What are your thoughts on the use of unmanned tea delivery drones in China? Comment below! 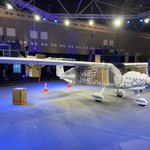